Dead Fantasy I is the first installment of the Dead Fantasy series, created by Monty Oum. First released in October 2007, this episode introduces the first six characters of the series in a three-on-three battle between Team Dead or Alive and Team Final Fantasy.

This episode has been labeled by Oum as the one he "wanted to do the least" because it only served as an "introduction" for the other episodes.

The episode begins with Yuna (of Final Fantasy X) running through an old Temple, being pursued by two shadowy figures. As she tries to leave the temple, she is finally confronted by her pursuers, Kasumi and Ayane (Dead or Alive).

Yuna and the two kunoichi begin a fierce, fast-paced fight. While Yuna manages to hold her own for a bit, she is outnumbered and starts to lose the fight. However, just as Ayane is about it stab her, Yuna is saved by her cousin Rikku, who steals the Tokkosho from Ayane.

With the odds evened, Rikku gives Ayane back her weapon and draws her own, and the four begin to fight even more determinedly, with a greater awareness of each other. For a brief time, Yuna and Rikku have the upper hand until Hitomi (Dead or Alive) appears and halts their final attack towards her comrades.

The fight continues, with the numbers in Team-DOA's favour once more. As the fight moves outside - thanks to Hitomi throwing Yuna and Rikku through a wall - things seem bleak for Team-FF until Tifa Lockhart (Final Fantasy VII) shows up and defends Yuna and Rikku from the others. Just as the girls get ready for a new fight, the episode cuts to a "To be Continued" screen, showing Tifa glowing with Materia. 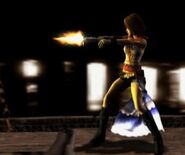 Retrieved from "https://deadfantasy.fandom.com/wiki/Dead_Fantasy_I?oldid=10178"
Community content is available under CC-BY-SA unless otherwise noted.