Dresspheres are an integral part of the battle system of Final Fantasy X-2, which allows the user to change their weapons, abilities, and appearance. A Dressphere roughly translates into a job class from other Final Fantasy games.

In Dead Fantasy, Yuna and Rikku can use Dresspheres to change their fighting styles mid-battle. Both official Dresspheres from Final Fantasy X-2 and fan-made versions have been seen in both the main series and preview images.

Dresspheres determine the character's weapon, speed, and appearance. During battle, a Spherechange can be implemented at any time to change the current dressphere. This is done to gain extra abilities from the Garment Grid, to activate the special dressphere, or to switch to a different job more suited for the particular enemy. Switching of dresspheres can be stopped or forced by status effects.

Yuna's initial dressphere, the Gunner allows the player to shoot an enemy from afar using Tiny Bee pistols. The dressphere has excellent accuracy and fair speed.

While in this outfit, a female user dons a revealing tank-top which exposes the midriff, short-shorts, a half-skirt hanging on the left hip and knee-high boots.

Rikku's initial dressphere, the Thief endows the wearer with high speed and agility, low defence, and twin curved dagger blades as their weapon.

Female users don a tight, revealing outfit including a mini-skirt, a bikini top, pull-on sleeves and a pair of boots.

Originally Yuna's job class from Final Fantasy X, the Summoner became a Dressphere option in Dead Fantasy IV; it wasn't a Dressphere in Final Fantasy X-2. This Dressphere allows Yuna to summon powerful Aeons into battle using a Rod, but leaves her pretty much defenseless for the time her Aeons are fighting. It should be noted that after all the Aeons were defeated, Yuna changed back into her Gunner Dressphere before collapsing. It's possible that using the Summoner uses up some of the user's own energy.

While in this Dressphere, Yuna wears a purple pleated dress, black boots, and a black spaghetti-string camisole under a white sash of material that wraps around her neck and over her chest, as well as a yellow patterned Obi and two separate sleeves on her arms.

The Songstress Dressphere is a support garment. While in this Dressphere, the user dances and sings to enhance the abilities of allies and decrease that of enemies. As of now Yuna only uses it as a costume in the music video, Dead Fantasy Gee. It is unknown if it will be used in the main Dead Fantasy series.

While in this outfit, the female user dons light dancing clothes with floral sleeves and knee-high boots. 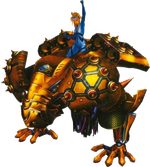 In an early promotional poster, entitled Dead Fantasy III: Wrath of the Fiend Ninja, it shows Rikku changing from a Dressphere with a large towering creature with glowing eyes behind her. The creature seems to be a power-up version of the Machina Maw; in a preview shown a A-kon, it shows Ayane watching a mecha-like machine grow to fullsize, resembling a discolored Eva from Evangelion. Not much is known about it but perhaps it is s special ability or power-up Monty Oum created for Rikku. 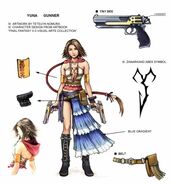 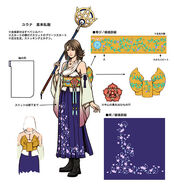 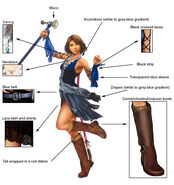 Concept of Yuna's Songstress Dessphere from Final Fantasy X-2
Add a photo to this gallery
Retrieved from "https://deadfantasy.fandom.com/wiki/Dressphere?oldid=10072"
Community content is available under CC-BY-SA unless otherwise noted.