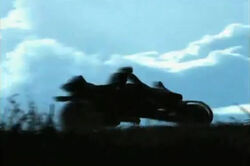 The Fenrir is Cloud Strife's personal motorcycle in the Compilation of Final Fantasy VII from Final Fantasy VII: Advent Children onwards.
The bike is a two-wheeled motorized vehicle with extraordinary manoeuvring capabilities; with a combination of polished black metal over brushed gold mechanics. On either side of the front tires is an expandable compartment that fits all pieces of the Fusion Swords, and/or the sword’s fully completed form.

The Fenrir switches to reverse easily, functions quite well in this gear, and seems to be able to keep itself upright and driving even without a driver.

Insight into the Fenrir[]

Looking for a mode of transportation to use in his new delivery business, Strife Delivery Services, Cloud barters with an unspecified owner for the bike, offering them free food and drinks for a lifetime at the 7th Heaven in exchange.
Quickly becoming his favoured vehicle, Cloud took the bike with him when he began shutting himself off from his friends due to his Geostigma infection; however he soon encountered Kadaj and the other Remnants of Sephiroth astride their bikes while travelling the wastelands surrounding Midgar. While surviving the onslaught, Cloud and the Fenrir would continue becoming entangled with the trio; with Cloud being once forced to crash the Fenrir in order to avoid running into innocent children.
Eventually, though, Cloud would prevail in their final encounters; destroying the bikes of Loz and Yazoo while the Fenrir remained relatively unscathed despite being hit by an energy blast from Kadaj. 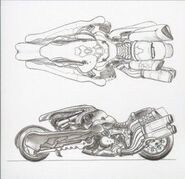 Concept of the Fenrir from Final Fantasy VII: Advent Children
Community content is available under CC-BY-SA unless otherwise noted.