Final Fantasy is a popular series of role-playing games produced by Square Enix (originally Square Co., Ltd.). It may be the most widely distributed game series of all time, including both standard console games and portable games, a massively multiplayer online role-playing game, games for mobile phones, a CGI movie, and two anime series.
The first installment of the series premiered in Japan in 1987, and Final Fantasy games have subsequently been localized for markets in North America, Europe and Australia, on several modern video game consoles, including the Nintendo Entertainment System, the MSX 2, the Super Nintendo Entertainment System, the Sony PlayStation, the WonderSwan Color, the Sony PlayStation 2, IBM PC compatible, Game Boy Advance, Nintendo GameCube, PlayStation Portable, Xbox 360, and Nintendo DS, as well as several different models of mobile phones. Future installments have been announced to appear on the PlayStation 3 and Xbox 360 game systems. It is Square Enix's most successful franchise, having sold over 85 million units worldwide to date.
As of 2008, twelve games have been released as part of the main series, and twenty-eight games in total, including spin-offs and sequels, have been released in the franchise. It currently ranks as the second-best selling RPG series ever, and the fifth-best selling video game series in the world.

Though each Final Fantasy story is independent, many themes and elements of gameplay recur throughout the series. From the strong influence of history, literature, religion and mythology on the story to the frequent reappearance of certain monsters and items, these shared elements provide a unifying framework to the series. Some key objects and concepts that have appeared in more than one Final Fantasy game include: 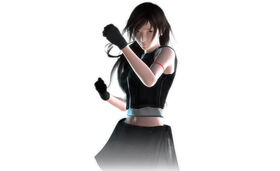 Set in a dystopian world, Final Fantasy VII's story centers on mercenary Cloud Strife who joins with several others to stop the megacorporation, Shinra, which is draining the life of the planet to use as an energy source.

An energy manufacturing mega company known as Shinra Inc. is harvesting the sheer life energy of the Planet (known as the Lifestream) as a simple fossil fuel. The Lifestream is processed and made into products ranging from electricity and heat to Mako and Materia. The latter two materials can work miracles, granting the wisdom of the Ancients to the user. However, the Lifestream, like most other fuels, is finite in supply, and the Planet's lifeforce is being malevolently drained by the constant exploitation of Mako by Shinra. Though aware of the harmful effects, they function without remorse.
However, the real battle lies not with a corporation, but a force much more competent from the distant past. A long-thought dead warrior bent on becoming a god by draining all of the Lifestream from the planet has risen again and will stop at nothing to achieve his goal.
— Official Introduction

The Planet, occasionally called Gaia, is the world of Final Fantasy VII. It is technologically advanced, with many of the modern inventions of the real world, such as cars, television, firearms, and cellphones. Their world is dominated by Humans, who are the only major race other than a few nearly extinct species. It is economically, militarily, and politically dominated by a powerful conglomerate called the Shinra Electric Power Company, which profits from the use of machines known as "Mako Reactors". These reactors siphon a special type of energy - called "Mako" - out of the Planet and convert it into electricity. One of the by-products of the extraction and refinement of Mako energy is materia, a concentrated form of Mako which allows the owner to use its magical properties. President Shinra leads his eponymous organization, and is thus the de facto ruler of the world. Shinra is involved with many horrible genetic experiments, through Mako experimentation, which have created many of the monsters that roam the Planet. One such experiment was Cloud.
In actuality, Mako energy is drawn from the Lifestream, a flow of life-force beneath the surface of the Planet. All life originates from the Lifestream, and returns to it upon death. In short, the Lifestream is the sum of all the life that has ever and will ever walk upon the Planet. The process of extracting Mako energy literally drains the life of the Planet in order to generate electricity. This can be seen quite clearly in the Shinra's capital city of Midgar, where the eight Mako Reactors have sucked out so much of the Planet's life-force that the area is covered in perpetual darkness and no plants can grow.
As the story progresses, the situation escalates and Cloud and his allies must battle Sephiroth, the game's main antagonist, who seeks to absorb the Lifestream from the planet and become a god. Ultimately, he is defeated by Cloud. 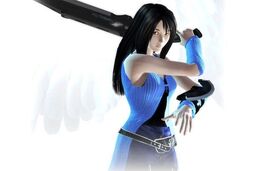 The game's story focuses on a group of young mercenaries who are drawn into an international conflict, and seek to protect the world from a sorceress manipulating the war for her own purposes. The main protagonist is Squall Leonhart, a 17-year-old loner and student at the military academy Balamb Garden, who is training to become a "SeeD", a mercenary paid by the academy. Along the way we meets Rinoa Heartilly, and the two begin a relationship.

"At the forefront of a rising tide of violence brought on by Galbadia's war declaration is a SeeD cadet named Squall Leonhart. Serious to a fault, Squall has earned himself the reputation of being a lone wolf."
—Official Introduction

The fictional history of the world of Final Fantasy VIII dates to its creation. Most of the back-story is revealed in the Final Fantasy VIII database. Folklore and magical beings also play a role in the game's setting. The world is occupied by four countries, Dollet, Galbadia, Esthar, and Balamb. A military organization called SeeD also plays a major role, with bases (called Gardens) in Balamb, Galbadia, and Trabia.
Several years before the events of Final Fantasy VIII, Edea Kramer created SeeD, a mercenary organization whose ultimate goal is to defeat the sorceress of each era. However, before the game, Edea is possessed by Ultimecia, a sorceress from the future, and ends up fighting the very organization she created. A possessed Edea aligns herself with Galbadia, and Ultimecia is preparing to use the nation as a puppet to achieve her goals. Timber continues to harbor several resistance groups to Galbadia's occupation, such as the Forest Owls, whose membership includes Rinoa Heartilly. Several SeeD cadets, including Squall Leonhart, are on the verge of becoming SeeD members at Balamb Garden.
Squall is unwillingly dragged into the role of the hero when the headmaster of Balamb Garden appoints him as leader of the academy midway through the game. He is often thrown into a leadership role, as is evident in Galbadia missions. During a late battle against Galbadia Garden, Squall demonstrates some leadership difficulties, which are tied to his lingering isolationism. Likewise, other characters make efforts to pull him out of his isolation and Rinoa expends a lot of energy to pursue a relationship with him. It takes considerable time for him to accept the others' offered friendship and fall in love with Rinoa and care for her. As time progresses, he grows more comfortable with the leadership role, especially when it comes time to defeat Ultimecia, the antagonist. 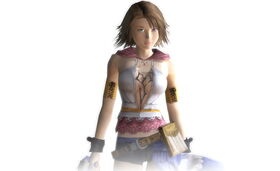 Set in the fantasy world of Spira, the game's story centers around a group of adventurers and their quest to defeat a rampaging monster known as "Sin". The player character is Tidus, a star athlete who finds himself in Spira after his home city is destroyed by Sin. During the game, Tidus, along with several others, aids the summoner Yuna on her pilgrimage to destroy Sin.

One thousand years before the events of Final Fantasy X, there was a great war between the cities of Zanarkand and Bevelle. Zanarkand's ruler, Yevon, could see that his city's Summoners were no match for Bevelle's machines, but he was unwilling to allow his city defeated. 'At Yevon's order, most of the surviving common citizens and summoners of Zanarkand gave up their lives to become Fayth, humans who willingly give up their lives to have their souls sealed in statues. Their existence as a fayth allows them to commune with summoners with whom they have established a mental link, granting them Aeons'. With these Yevon created an invincible armor that would grip Spira in terror: the monster known as "Sin".
Sin's first act as an instinctive beast, "programmed" to destroy advanced technology, was to decimate the original Zanarkand. Sin could only be defeated by a Summoner's "Final Aeon," only to be reborn again several years later. Thus it was for one thousand years: Sin would be defeated, the summoner who achieved the feat would die, and Sin would be born anew. This repetition of was known as "the spiral of death."
--Introduction

Final Fantasy X revolves around Yuna, the daughter of the previous High Summoner, set to follow in his footsteps. Yuna quests for the Final Aeon: the one power that can slay Sin. Tidus joins as one of Yuna's many guardians, and travels with her to obtain the Final Aeon. However, the quest goes much deeper when high-ranking religious leaders betray the teachings of Yevon, the celestial overlord of Spira, and Yevon himself condones it. Tidus battles with his past and his true self while trying to sort his emotions and get back home to his world.
Once the player completes Yuna's pilgrimage, Lady Yunalesca—Yevon's daughter and the first summoner to have defeated Sin—tells the group that the Final Aeon is created from the spirit of one close to a summoner. After defeating Sin, Yu Yevon's spirit possesses the aeon, transforming it into a new Sin. The group decides against using the Final Aeon and they defeat Yunalesca. They then seek a new way to permanently destroy Sin that will not require any sacrifices. This leads the group to enter Sin's body and battle Yevon. However, we learn Tidus himself is a dream manifestation of the Fayth's memories, and he will cease to exist with the defeat of Sin. Yevon is defeated, Sin's cycle of rebirth ends, and the spirits of Spira's fayth are freed from their imprisonment, dispersing the pyreflies of the aeons, and Tidus in the process.

Retrieved from "https://deadfantasy.fandom.com/wiki/Final_Fantasy?oldid=8857"
Community content is available under CC-BY-SA unless otherwise noted.