Keyblades are mysterious weapons that are heavily featured in the Kingdom Hearts series. Wielded by a number of important characters, the Keyblade is a main part of the battle between Darkness and Light.

A number of Keyblades - including ones from the Kingdom Hearts series and fan-made editions - have appeared in the Dead Fantasy series. People known to be able to wield Keyblades in Dead Fantasy include Kairi and her Nobody Naminé, who use them as their primary weapon.

The Keyblades were originally created in the image of theχ-blade by those who intended to use the darkness upon the world, but some chose to use them to protect the worlds of light. One legend states that the Keyblade master saved the world, while another said he wrought chaos and destruction upon it.

As the name implies, in combat, Keyblades are used in a manner similar to swords. Despite the fact that most possess no actual cutting edge, Keyblades still make efficient combat weapons and are shown to be particularly effective weapons against Heartless, Nobodies, and Unversed. However, as a downside to this, the Heartless use the Keyblade as a homing beacon, and thus Keyblade wielders are at constant risk of Heartless attacks at any time.

The main power of the Keyblade, however, is the ability to seal or open the barriers between worlds, as well as to "lock" a world's Keyhole, preventing the Heartless from attacking that world's heart. As an offset of this ability, the Keyblade can also be used to lock or unlock any lock, allowing the user to access any sealed interior, whether it be a locked room, gate, or treasure chest. Keyblade wielders are also able to wield a second Keyblade using the Synch Blade ability.

The Keyblade has a special power that only lets a chosen wielder hold it. While there are many qualities a Keyblade wielder must have, the only known requirement is that they have an exceptionally strong heart. It is implied in Kingdom Hearts Birth by Sleep that it is possible for a Keyblade Master to choose a person as their successor if they have the main qualities that allow them to hold a Keyblade, as Terra chose Riku to be his successor. Kairi seems to have inherited the same ability when she accidentally touched Aqua's Keyblade. (It should be noted that while Naminé didn't inherit this ability in the traditional sense, as Kairi's Nobody, and moreover a part of Kairi, she too can weild a Keyblade.)

All Keyblades shown have the same distinguishing features that are modeled after a key: a guard with a handle, a hilt, and a head at the end of the shaft that resembles the teeth of a skeleton key. Most Keyblades also have some theme, usually a world or a person associated with that world, that will reflect in its appearance.

Destiny's Embrace is Kairi's "default" weapon. She first received this Keyblade from Riku in Kingdom Hearts II, and it seemed to once belong to Aqua.

It is symbolic of Aqua's meeting with Kairi (in Birth by Sleep), and Kairi herself.

Its design is based on Destiny Islands, Kairi's home, and appears round and curvaceous to the point of appearing harmless. It featuring elements from the island on its body, including a hilt formed into a breaking ocean wave and a beige vine of sand, and a bouquet of colorful flowers which form the teeth. A red, silken Keychain connects the hilt to the Paopu Fruit token.

Kairi is briefly seen wielding Destiny's Embrace when she first appears in Dead Fantasy II; however, since she quickly changed to Valor Form and changed weapons soon after, she hasn't actually used it in battle yet.

The Oathkeeper is a one of a pair of Keyblades, and is the counter-opposite of the Oblivion. The Oathkeeper is symbolic of Sora's memories of Kairi. The Keyblade belongs to Sora, but was also wielded by his Nobody Roxas, who gained it and Oblivion when his original Kingdom Key transformed after he absorbed Xion.

The Oathkeeper's shaft displays two hearts, and its handle bears two angel wings, contrasting the bat wings that comprise Oblivion's handle. The teeth are fashioned in the shape of the Kanji for "light" (光), corresponding to the Oblivion's kanji for "darkness". Its Keychain token is Kairi's Wayfinder, a star charm sewn together from Thalassa Shells.

After transforming into Valor Form in Dead Fantasy II, Kairi battles with both the Oathkeeper and Oblivion at the same time, similar to how Sora and Roxas wield duel-Keyblades. 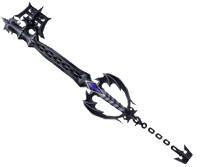 As mentioned above, The Oblivion is a one of a pair of Keyblades, and is the counter-opposite of the Oathkeeper. It belongs to Sora, and it is symbolic of Sora's memories of Riku.

Oblivion is similar in shape to the Kingdom Key, though it is black and has a longer reach. The hilt guard is comprised of two bat-like wings extending downward. The teeth are in the shape of the Kanji for "darkness" (闇). The Keychain's token is a black version of Sora's crown necklace. A chain-like design runs up the length of the blade. The diamond in its hilt also resembles the diamond in the original logo of Hollow Bastion.

The Lunar Eclipse is a fan-made Keyblade which is wielded by Naminé. The original designer of this Keyblade is the DeviantART user "CBJ3".

The Lunar Eclipse has a long pointed shaft and the teeth resemble three spikes. Although the base of the Keyblade appears solid, the hilt and additional detailing appear weak and delicate, forming wispy curls all along the Keyblade. The Keychain charm resembles the symbol of the Heartless. The overall color scheme is silver and metallic blue.

There is also a Keyblade that shares this name with another Keyblade in Kingdom Hearts 358/2 Day, but it is not the same one. This Keyblade design was made prior before the game's release.

Similar with the pairing of the Oathkeeper and Oblivion, the Lunar Eclipse appears to have a duel-opposite which Naminé also wields. In a preview, it shows Naminé using this Keyblade to summon Vincent Valentine.

This fan-made Keyblade has not yet been named, and has only appeared in previews, but it appears to be based on the Oathkeeper (both weapons have similar teeth) but in black with red detailing and has a round handle guard. The design could symbolize Vincent, as he too wears black and red. If one looks closer at the teeth they can see three heads, the same that appear on the Cerberus charm on Vincent's gun.

Seeing as how this Keyblade melts into the ground, turning into a red mist, and then into Vincent, it's possible that this Keyblade might actually be Vincent in a new transformation (though Vincent transforming into a mystical weapon instead of a monster is as yet unheard of).

This is another Keyblade that is used by Naminé. It can be seen during the battle between Naminé and Momiji when she opened portals and fired Keyblades out of them. One of those Keyblades is the Levitas Eclipse, which was also designed by DeviantART user "CBJ3". 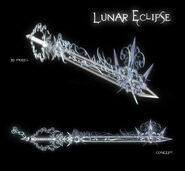 Concept of Lunar Eclipse and its 3D model

Naminé with the Lunar Eclipse and other Keyblade-like "weapons"

Total Eclipse
Add a photo to this gallery

Kairi holding the Oathkeeper and Oblivion

Naminé with the Lunar Eclipse
Add a photo to this gallery

Retrieved from "https://deadfantasy.fandom.com/wiki/Keyblade?oldid=10750"
Community content is available under CC-BY-SA unless otherwise noted.