Materia is Tifa's source of her magical powers in Dead Fantasy. Originally from the Compilation of Final Fantasy VII, they allow a character to cast spells, summon, use new command abilities, and have various other uses. Materia magic seen so far in this series so far include Fire, Blizzard, Thunder, Haste, Slow, Gravity, Stop, Ultima, Barrier, Poison and Blind. Tifa also keeps the White Materia as well.

When Hitomi acquired the Materia from defeating Tifa, she was seen using Gravity, Fire, Quake, Blizzard and Thunder. As of the fifth episode, Tifa has lost most, if not all, of her Materia to Hitomi as well as the White Materia which Hitomi shows it to Helena Douglas after Tifa was incapacitated by Hayate and his shinobi in her last stand at the warehouse.

In the remake version, the Materia are now shown to be translucent when Tifa carries it in both of her arms which was briefly glowed in seconds. 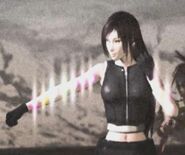 Retrieved from "https://deadfantasy.fandom.com/wiki/Materia?oldid=10961"
Community content is available under CC-BY-SA unless otherwise noted.