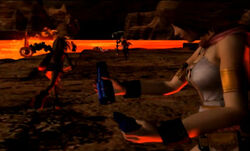 The Potion (ポーション, Pōshon), also known as Tonic and Cure, is a recurring healing item in the Final Fantasy series. Whilst its colour and appearance change from game to game, the effect remains largely consistent. Potions restore a small amount of HP to a party member and are usually the most basic healing item in the game, but the exact amount of HP healed changes from game to game. In addition to the basic Potion, there are two higher levels of Potion called "Hi-Potion" and "X-Potion", which heal more HP, as well as the "Mega-Potion" which acts as a Potion used on all party members.

More often than not, the potion is the initial and most direct way to restore health in all the Final Fantasy games initially because it is the only usable restorative tool used before certain healing spells become available. In some of the games, the item can be used on the undead to cause damage. For most of the games (i.e. except Final Fantasy VIII), the most a party can carry at any given time is 99. In certain games such as Final Fantasy V, X, and X-2, the Potion can be combined with another Potion or item using the Chemist's Mix ability. Usually, combining two Potions results in a Mega-Potion.

Community content is available under CC-BY-SA unless otherwise noted.